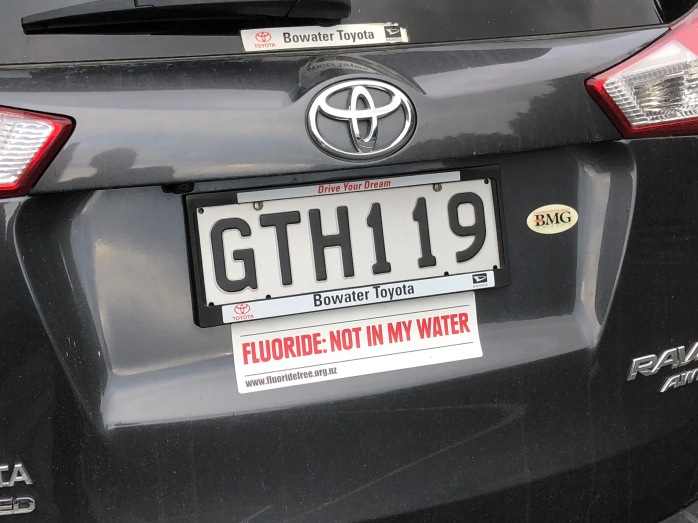 Understanding the Nature and Intent of the Anti-Water Fluoridation Movement in the Context of My Workplace – A Whole Dental Health Reflection.

If you want to assert a truth, first make sure it is not just an opinion that you desperately  want to be true. Neil deGrasse Tyson.

From the German 16th century Martin Luther to the Tolepuddle Martyrs of early 19th century Britain, there have been many human movements demanding change, calling for greater representation, challenging authority and creating opposition to the established norm. Such pressure groups range from the political and cultural to those championing causes from the environment, animal, religious and human rights to global public health. In this of late has a dental dimension, related to the contention of fluoridation of community water supplies. Rather that accepting the status quo and established public health agenda of imposing it on all the population without means of proper address pressure groups and activists have rallied to challenge its scientific validity.

In New Zealand, where I live and practice, 40 percent of 5 year old children have tooth decay, whereas only 27 out of 67 councils fluoridate their water supply and 54 percent of the population have un-fluoridated water. The adoption of water fluoridation nationally, in line with World Health Organisation recommendations, has become a highly contentious public health issue. Alleged negative outcomes of it range from the risk of reactive biological effects of water fluoridation, the dosages of which are up to 200 times higher than is found in mothers breast milk. It is perceived however, in the New Zealand national context to be beneficial due to lower than globally accepted levels of Fluorine, one of a many natural occurring chemical elements, in the native soil. The debate rumbles on beyond our teeth to other parts of the body, and into our professional learning needs as I hope this account demonstrates.

My clinical setting brings this strikingly  into focus. I have a broad range of clients with differing opinions on fluoride, more so than I have ever experienced before. The client base is attracted to the “natural” philosophy of the dental practice where I work part-time. Many also show an active scepticism with respect to the myriad of additional products found in many toothpastes, beyond the well-known offenders, Triclosan and Sodium Lauryl Sulphate.

Fluoride is a negatively charged ion of fluorine and is one of the most abundant elements found in nature. Sodium Fluoride is an inorganic salt of fluoride used topically or in community water fluoridation programmes to prevent dental caries. Fluoride appears to bind to calcium ions in the hydroxyapatite of surface tooth enamel, preventing corrosion of tooth enamel by acids. This agent may also inhibit acid production by commensal oral bacteria. However, Sodium Fluoride is an extremely toxic substance, just 200mg of it is enough to kill a young child and 3-5gms, a teaspoon, is enough to kill an adult. The worldwide criticism of systemic fluoride stems from contention with “low margins of safety and lack of control over the amount of individual intake when administered on a community level.”

Who are the opposition? They appear to be well organised and motivated, mainly libertarian and environmental activists, the movement of which began in 1960’s and gained more strength as scientific research began to further support their philosophies. They critically claim that once fluoride is in the water supply it is impossible to control the individual dose and, that fluoride is found in other natural and “added to” products, like tea and mouth rinses, can increase that dosage increasing risk over time. The bigger argument alludes to the moral issues revolve around human rights, mass medication, informed consent necessary to comply ethically for prescriptions of all medication. This is the reason most Western European countries have ruled against its use. The lines are drawn between the “official” evidence, its interpretation and determination as to its veracity within the a given country’s political and social context.

The party line is represented by the scientific community such as the established and renown Centre of Disease Control  and Prevention (CDC) in the US. They state that “Fluoridation of the community drinking water is a safe, cost effective and efficient strategy of reducing dental decay among Americans of all ages and from all social strata”. The CDC maintains and attributes a steep decline in tooth decay in the US to fluoride, whereas the lobbyist perspective is that disease rates are globally reducing despite the wide distribution of fluoridated products. They assert that serious research attributes improvement with fluoride as only between 40% – 50%.

The related long term health effects of water-fluoridation is the greater bone of contention with my clients. They are well informed in this matter and their fundamental discord with this element extends in some to the belief that topical fluoride is a problem too.

To add fuel to the smouldering fire The Cochrane Collaboration, a robust, renowned critical scientific organisation looked at 20 studies on the effects of fluoridated water on tooth decay and 135 studies on dental fluorosis. They published the results in 2015. They concluded that “all results are based predominantly on old studies and may not be applicable today. Within the ‘before and after’ studies we did not find any on the benefits of fluoridated water for adults” but there was “insufficient information about the effects of stopping water fluoridation”. They also found “insufficient information to determine whether fluoridation reduces differences in tooth decay levels between children from poorer and more affluent backgrounds”. “Overall, the results of the studies reviewed suggest that, where the fluoride level in water is 0.7 ppm, there is a chance of around 12% of people having dental fluorosis that may cause concern about how their teeth look”.

When reviewing the considered opposition to fluoride I am bewildered by the lack of academic dental advocacy for water fluoridation to counteract them. Those who choose to face educated and fundamental opinion, from well-read academics to informed members of the general public. I also feel, upon reflection, that I have never been fully conversant with all the facts upon consideration. New truths revealed can pose a dilemma to professionals who hold to established doctrine.

How deeply would we go down the rabbit hole of confronting our knowledge gaps? Do we solely rely on the dental industry, who cleverly veil their commercial interests by support professional bodies financially and at the same time promote the benefits of their products, with verifiable education? Are we really serving our client community and their need by paying lip service to what we are promoted to learn? A deeper awareness of their attitudes towards alternative approaches and concepts, alternative oral health products should be engaged with, free of judgement. Some may be persuaded by radiographic or visual evidence of a need to change their oral health habits  in the direction of conventional methods like the use of topical fluoride clinically or at home. Conversely, a caries free mouth, demonstrably managed and maintained requires us to think differently in our approach to their support. What have they done to achieve that and what can we learn from it?

Being wedded to our belief system doesn’t make us right, we maybe the product of our initial and ongoing dental education. But by questioning everything, not relying on lazy face value attitudes, reflecting on our own and another’s stand point drives enlightenment and ultimately action upon it. The a result of new knowledge gain is enlightenment, and is ongoing. In the bubble of my clinical culture here in Nelson I would continue to be guided by evident clinical risk and need but also a policy of treating not just what I see but who I see. I would also advocate for associated lifestyle and nutritional behaviour change if indicated. The obvious “big elephant in the room” is the need for high quality oral health education, effective saliva function, beneficial bacteria predominating, fermentable carbohydrate restriction and control.

As the food supply historically evolved it has negatively deviated from ancestrally orientated diets to less nutritional and more simple carbohydrate loaded foods, which in turn play to addictive eating behaviours. The dawn of the modern diet, championed by “experts in the field” of nutrition after the last world war, has led to an increase in chronic communicable diseases, like dental caries. Some even suggested that decay in teeth was a so called” nutritional “side effect” of a healthy diet composed mainly of carbohydrates. Fluoride it seems was the answer to this condition.

Dental health education, in the form of better oral hygiene, nutritional advice and the use, where necessary of topical fluoride is championed loudly by the opposition as an alternative to needless and ineffective water fluoridation. I was pleasantly surprised that they were more supportive of what I champion as a dental healthcare professional. I was deeply disappointed that the proponents of water fluoridation weren’t advocating for these measures in as much magnitude.

We must never forget who benefits from continuing professional development, our clients first and foremost, their safety and health are our primary concern and how we attend the need of updating that knowledge is a sacred truth, where does it come from, who is delivering it, want is their intent, and how do we interpret it? I fall on the side of healthy scepticism regarding water fluoridation, it’s safety and benefits as a result of this inquiry. I will continue to propose the use of topical fluoride in those who have “at risk” lifestyle behaviours and nutritional choices less than optimal for stable oral health. I will give support to those who continue to refuse to use fluoride products with options and advocate behaviour changes that afford a similar outcome to topical fluoride use.

5.The Fluoride Debate: The Pros and Cons of Fluoridation

6.The Case Against Fluoride, Paul Connett in New Zealand 22Feb2013

← Functional Foods, Pre and Probiotics
Weston A. Price and notable more “modern” others →

This site uses Akismet to reduce spam. Learn how your comment data is processed.

The Journey Along The Way

Yes, Bears do. (Can't speak for the Pope though.)

Brewing techniques, beer and the ins and outs of running a small brewery in Northland NZ.

Pinot in all its glory, cool Kiwi craft beer plus shitz and giggles of course.

In the beginner’s mind there are many possibilities, but in the experts there are few – Shunryu Suzuki

The Science of Human Potential

Understanding how to be the best you can be. Professor Grant Schofield.

Dispatches from a grape nut

The Land, It's People and their Wine

Off The Plot in New Zealand - The Ongoing Journey